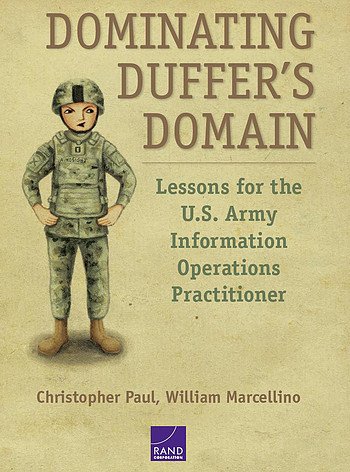 A Review by Ric Cole, Director (Military), i3 Gen

Written in the style of The Defence of Duffer’s Drift by Maj Gen Ernest Dunlop Swinton in 1904, this short (about 50 pages) piece sees a young Capt Hindsight deploying in an Info Ops appointment and having a series of vivid dreams. The scenario, set in Atropia, develops with every dream and the young officer carries forward the lessons from each into subsequent dreams. These are ultimately compiled into 26 lessons, which (we hope) will see Capt Hindsight through her tour as an Info Ops practitioner.

Well-written, humorous in parts and tragic in others, this unusual report from RAND Corporation, departs for the conventional and applies an appealing and relevant twist to a Victorian military classic. While many in the InfoOps community have sought to apply these lessons within their headquarters or units, the wider audience has yet to be reached.

We (Yes – YOU too!) must advocate the lessons from Capt Hindsight’s restless dreams and champion their application before we unwittingly hand the advantage to those who wish harm upon us, undermine our alliances and attack our shared values.

To give you a flavour of this excellent ‘report’, this article is an interpretation of the first 13 lessons through the lens of Digital and Social Media in the Military and Defence sector. We hope it will encourage you to download the full report, consider its lessons fully and in turn share as widely as possible.

The report, (as its authors acknowledge) maintains four key elements of the original; simplicity of style, satirical in nature, demonstrates the tactical principles and illustrates the tragic results of ignoring these principles. It was recommended to me by a close colleague, who used it to mount his own “InfoOps campaign” within an operational UK headquarters, by printing off multiple copies and covertly distributing them around the department heads and principal staff officers, or anyone who failed to recognise the importance of integrating InfoOps into the operational plan.

However, what of the military’s use of social media? After all, it is acknowledged that we are now, more engaged in information warfare and the information environment is seen by many as the operational (and even strategic) vital ground.

So, what #MilSocialMedia lessons can be drawn from those in Dominating Duffer’s Domain?

Lesson 1 – Effective InfoOps cannot be an afterthought. This could not be truer than in military social media. Accounts must be well-established, with engaging content and a receptive following. Without a credible online presence and a track record of healthy two-way communication, any attempt to use social media during an operation, whether in Humanitarian Assistance and Disaster Relief (HADR) or combat, will be ineffective. All too often commanders see social media as an unnecessary risk, not as an opportunity to engage with the audience and actors long before boots are on the ground.

Lesson 2 – If effects in and through the information environment are important to the commander, they should feature prominently in the commander’s intent. As with Lesson 1, any InfoOps practitioner from the last decade will tell you stories of commanders demanding the liberal application of “InfoOps Pixie Dust”, without incorporating informational effects into the effect-based planning cycle, or properly resourcing the InfoOps cell and its related activities. Even getting internet access in the cell is all too often a show-stopper.

Commanders must be encouraged to understand better the effects that can be achieved by InfoOps, including the use of social media, both in support of ‘home games’ (community engagement and recruiting) and ‘away games’ (overseas exercises and operations). While they may not wish to engage through a personal account (although increasingly many do), they must TRUST their InfoOps practitioners and apply an uncomfortable amount of mission command, if the use of social media is to be agile, timely and effective.

Lesson 3 – Manoeuvre and fires generate effects in the information environment too. It is hard to imagine a military operation anywhere that will not be reported on and seen on social media, especially when it ‘goes loud’. Therefore, it is essential that our messages be ready and effective, prior to H-Hour. Failure to do so will immediately hand the operational information advantage to the adversary and anyone else wishing to exploit the vacuum; from fringe groups and conspiracy theorists to pro-Russian trolls and their useful idiots. Contingency plans must be drawn up and approved for both worst case and most likely case scenarios and enacted without delay.

Lesson 4 – Plan for friendly force mistakes and adversary propaganda. Mistakes will be made, accept the fact and include it in your planning assumptions. Every holding line (hopefully released within 15-20 minutes of any event) should include, “not believed to be the result of enemy action”. Even if later investigations show that the event was the result of sabotage or an attack, you have denied the first-mover advantage to the enemy. Better to be nearly right and on time, than completely right days or even weeks later.

Have a counter-propaganda plan. Essential to this will be third-party advocates, voices of expert commentators, who will speak in your defence. Enable, empower and amplify them before you need them. Counter-propaganda via ‘official’ accounts rarely works, a Twitter war only amplify your opponent’s voice. Your advocates will have been identified during your Target Audience Analysis; they will already have the facts to undermine the adversaries’ version of events through well-informed comment to established audiences.

Lesson 5 – All communications are potentially global. A PSYOPs leaflet fluttering down from the skies will soon be picked up by a teenager, who photographs it with his phone and posted it on his social media. The effect of the message is now global, and audiences will all have a different interpretation. The InfoOps planner will always consider the 2nd order effects and 3rd order consequences of a message, as all should be aligned to the Communications and Effects Framework, which sets out the narrative (hate the term if you must!) and the supporting themes.

Likewise, be prepared for actions elsewhere having a direct (unforeseen) effect on your operations. In the summer of 2009, I was deployed in Helmand province, and at the height of Operation Panther’s Claw in support of the Afghan elections, our messages were not making the international media outlets as we had expected. The reason? The King of Pop, Michael Jackson, had died of an overdose in LA and this was ‘Breaking News’ for nearly a week. Somethings simply can not be planned for – Black Swans[1].

Lessons 6, 7 and 8 speak to the importance of InfoOps coordination and that individual information-related capabilities (IRCs or Information Activities in UK doctrine) achieve minimal effects individually and will have readers from all the disciplines nodding in well-coordinated agreement.

Lesson 9 – Information-related capabilities can have lengthy timelines, for both execution and results. It is said that the British Army was not in Helmand for ten years, but there for 6 months twenty times. Each Task Force was attempting to win the campaign within their short time, with Red Amber Green (RAG) analysis to support their ‘success’. In recent years, Information Warfare has become front page news, yet this is not reflected in our capabilities, and even the establishment of Specialist Units have yet to really prove to be an effective counter to Russia, Chinese, ISIS or even al-Shabab activities amongst many. However, we are getting better…

To date, InfoOps practitioners are not considered ‘experts’ alongside their counterparts in fires or logistics, in part because the results of their effects may not present themselves for months or years, and these effects are difficult to measure or visualise in PowerPoint – often to the dismay and occasionally the wrath of senior commanders.

Lesson 10 – Events do not unfold according to plan. Alternatively, as the Brits would say, “No plan survives contact with the enemy”. Or if you prefer, as Mike Tyson so eloquently proposed, “Everyone has a plan, until they get punched in the face!” One tool available to the InfoOps practitioner to minimise the effects of a ‘punch in the face’ is social media; it allows for a rapid and agile message to react immediately to unforeseen and unfolding events. Yet, this can only be achieved if the team is Trained, Empowered, Amplified and Mentored (TEAM).

Lesson 11 – Warfare, including Information Warfare, involves trade-offs. Choose your battles, block trolls and bots, do not engage in spats with anonymous accounts with only a handful of followers (no matter how ‘wrong’ they are!). Sometimes OPSEC may have to be relaxed to enable engagement. For example; To hold an effective Med Cap and Vet Cap task, you will have to tell the patients or farmers where and when the event is taking place and subsequently mitigate the increased risk of attack or intimidation by increasing your Presence-Posture-Profile. The same holds true for a live social media Q&A!

Lesson 12 – The efforts planned and coordinated by InfoOps need to be monitored and assessed, otherwise you’re shooting in the dark. Monitoring and Evaluation (M&E) must be resourced and must start (and benchmarked) before you engage on social media or deploy on operations. Social media platforms offer a whole raft of analytical tools, mostly for free, and must be incorporated into the plan. Top Tip: The InfoOps team, just like Public Affairs/Media Ops and the J2 ‘All Source’ cell, need access to unrestricted internet – better let J6 know!

I could go on, but then you’ll have no reason to read it for yourself!

Dominating Duffer’s Domain offers InfoOps practitioners, commanders and staff officers at all levels valuable lessons in the integration, resourcing, coordination and prioritisation of Info Ops and all of the Information Activities and their related disciplines. It should be a mandated read for operational planners (no matter which desk they sit at) and it provides handy reminders for those who have been in this game for too long for it to be “career enhancing”.

I hope that this short review has whetted your appetite to download onto your mobile communications device a copy of Dominating Duffer’s Domain from RAND Corporation and that you will draw out some of your own lessons.

Applying Dominating Duffer’s Domain to #MilSocialMedia will be the subject of a Live Twitter Q&A, hosted by i3 Gen, on Wednesday 10th October at 1900-2000. This will be a scene setter for some of the lively discussions we anticipate at the SMi Group Military Social Media conference on 28-29 November 2018.