Tucked away in the conference facility at a central London Hotel, over 80 representatives from more than ten countries gathered to discuss the use of social media in the Defence and Security sectors. Drawn from across Public Affairs, Info Ops, recruiting, policy-makers and special advisors, as well as academics, journalists and consultants, the audience attended workshops, presentations and networked.

As the Military Director of i3 Gen, I had the honour to chair the event, organised by SMi Defence. Over the two days, I helped tie together the key lessons, encourage the interactions and facilitate the panel discussions and the questions. At all times, being conscious that many are not native English speakers and that the topic of Information Activities can easily drift into choppy and classified areas.

After my opening remarks and parish notices, the event kicked off with Anthony O’Bryant (Deputy US Army Digital Media Division) with practical “survival tips” to develop and grow a social media programme.

Many were pleased to hear that even the mighty US Army suffers from many of the same challenges faced by the community across the world; little Mission Command due to a lack of understanding and rarely given the tools needed for the job. Tony emphasised that success on Social Media starts with a change of mindset when it comes to Digital Communication and emphasised the need to not treat social media like a ‘billboard’. 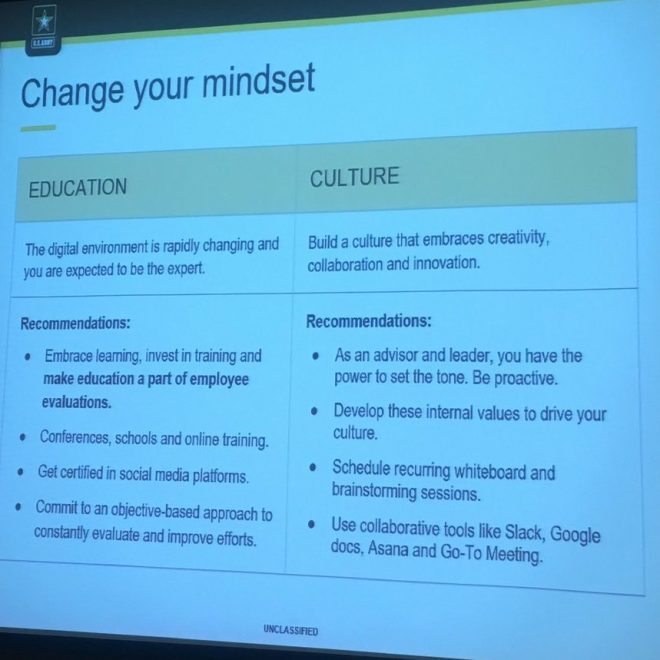 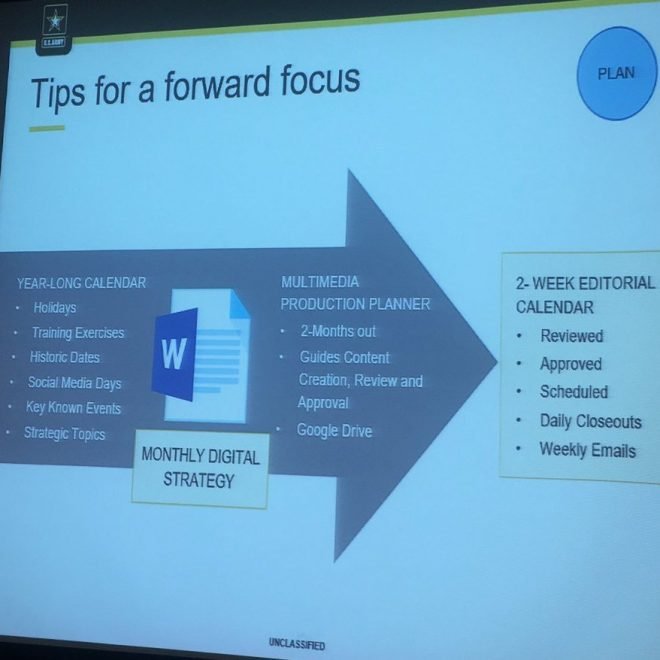 Tony also shared the beneficial best practice of having a Content Plan or Calendar, not dissimilar in purpose to a that familiar military planning tool,  ‘The Sync Matix’.

However, perhaps Tony’s most memorable advice was his encouragement to “Keep It Weird!” 🙂

Next up, Colonel Chris MacGregor (Assistant Head of British Army Media & Comms) outlined the new #DigitalMedia policy and reminded all that social media is not the answer to everything, but only a tool to be used. 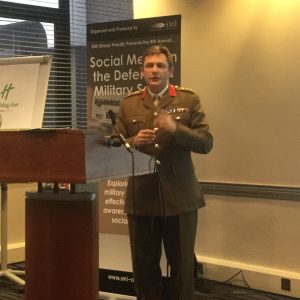 He also highlighted the need for trust (a fundamental factor in Mission Command), legitimacy and credibility – a theme that was to continue to the end of the conference. In addition, Colonel Chris mentioned the role of Social Media technology for Internal Communications; such as Defence Connect, a version of Jive used by the British Military. 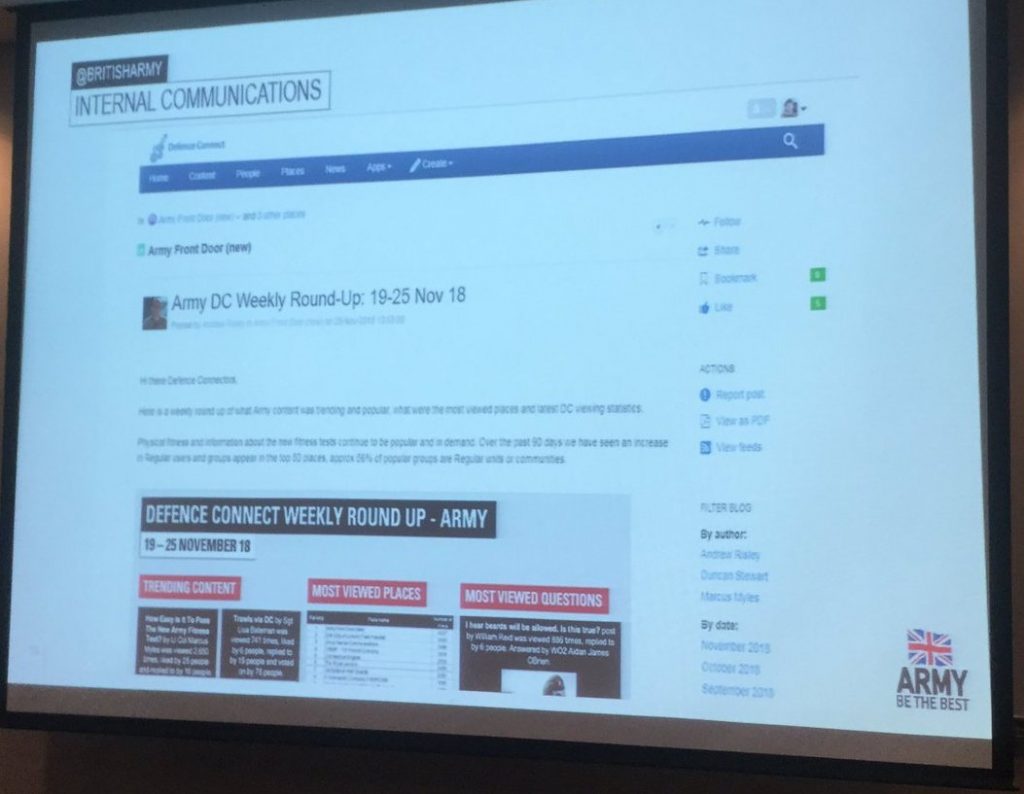 Finally, and importantly, Colonel Chris spoke about the requirement to live by the Army’s values and standards on social media, just as we do IRL (In Real Life).

After the first coffee break for networking and tweeting, we had a very impressive and thought-provoking presentation from self-confessed Cyber Guerrilla, Mr Jelle van Haaster, a cyber operations researcher for the Dutch MoD and author of “On Cyber”. Jelle spoke to the different situations that Social Media and wider Information Activities could be used. Highlighting the important differences between engaging Social Media and ‘traditional’ Public Affairs / Public Relations. 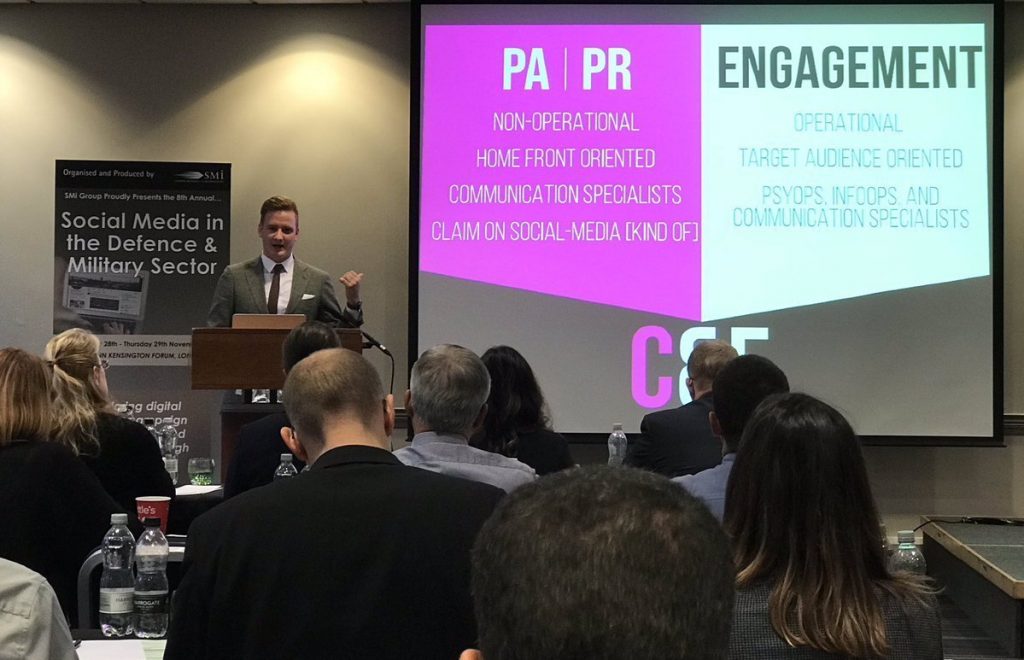 Jelle gave us all pause for thought when he said “give me one day, just one day’s budget from the Afghan campaign and see what we can achieve” with Information Activities. Jelle’s presentation emphasised that Physical Domain effects can be achieved by Cognitive actions at a fraction of the cost of Kinetic platforms! He called this Return on Influence… 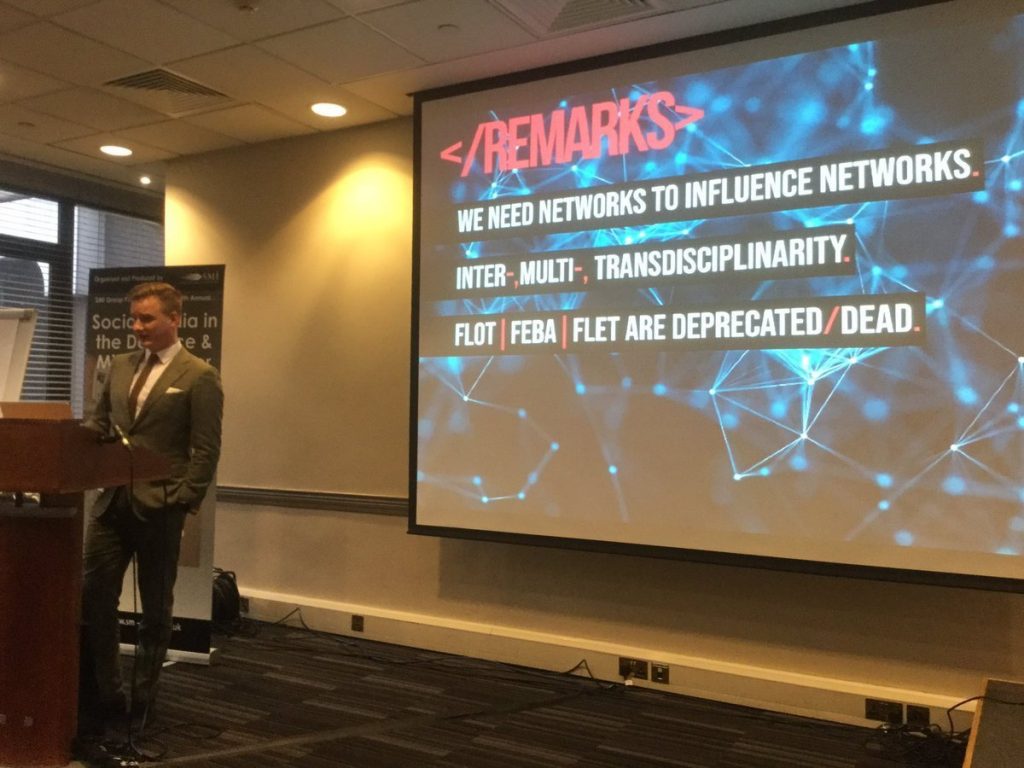 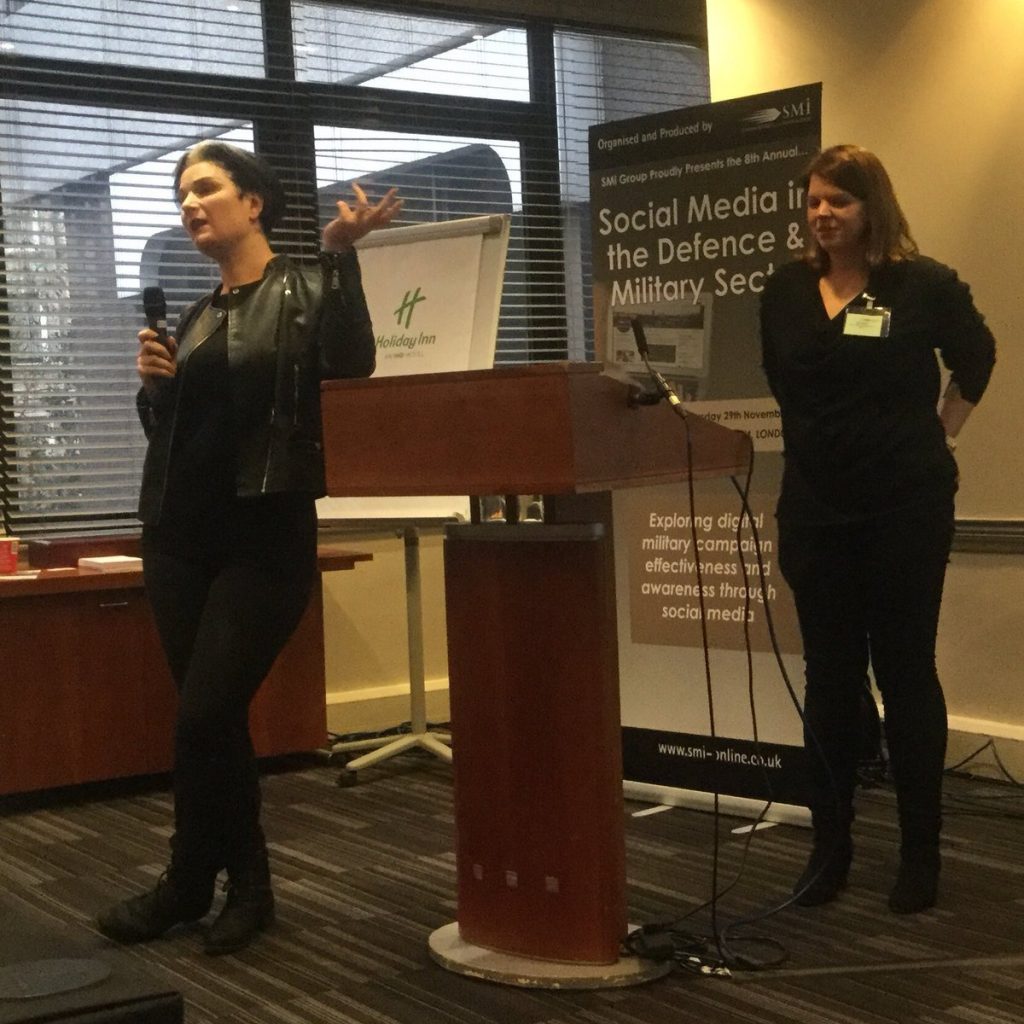 Following Jelle, the Royal Navy social media team of Ms Helen Craven and Mrs Alex Schillemore got the delegates on their feet and challenged us to consider whether some of the latest technology was “Creepy or Cool?”

They then went on to describe the Royal Navy’s digital strategy that has multiple target audience personae that they use to guide their messaging, and their use of Social Media influencers to reach beyond their core audiences.

Alex then went on to describe their (amazing ed.) supporting role to the current Channel 5 series Warship which is documenting life aboard the Type 45 Destroyer HMS Duncan; demonstrating how the social media ‘engagement’ is coordinated across all channels and synchronised with each episode, including the use of live Q&As. 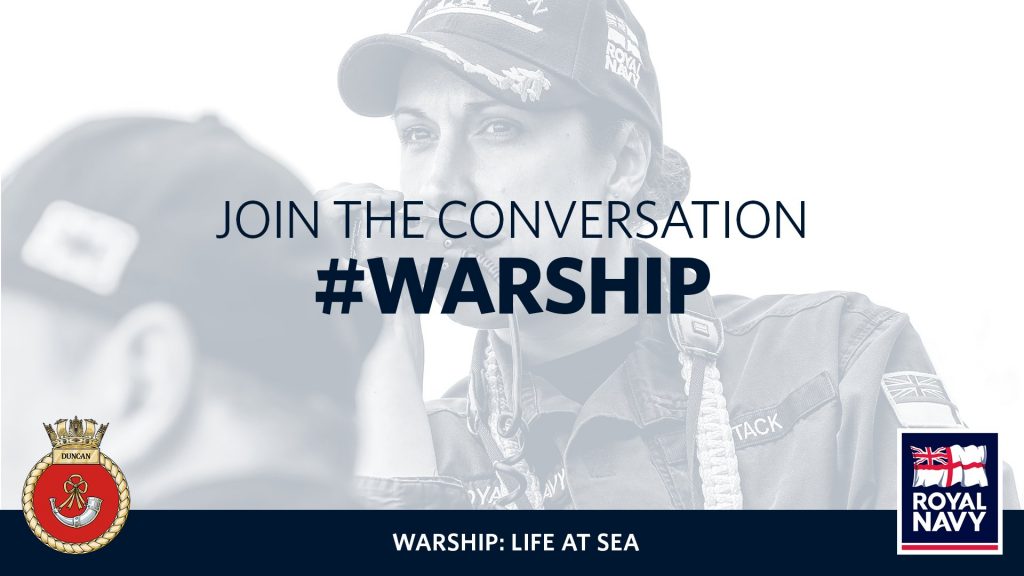 During their presentation, Alex made a very important observation, on social media, “People don’t follow an Appointment or Organisation, they follow People”. This authenticity leads to real engagement.

After a networking lunch, Ben Heap from the NATO StratCom Centre of Excellence in Riga delivered his piece on Embrace the Chaos: Hybrid Threats, Social Media and the Strategic Communication Mindset. Outlining the Understand-Identify-Counteract model and the DIDI framework for threat criteria; Deception, Intention, Disruption, Interference 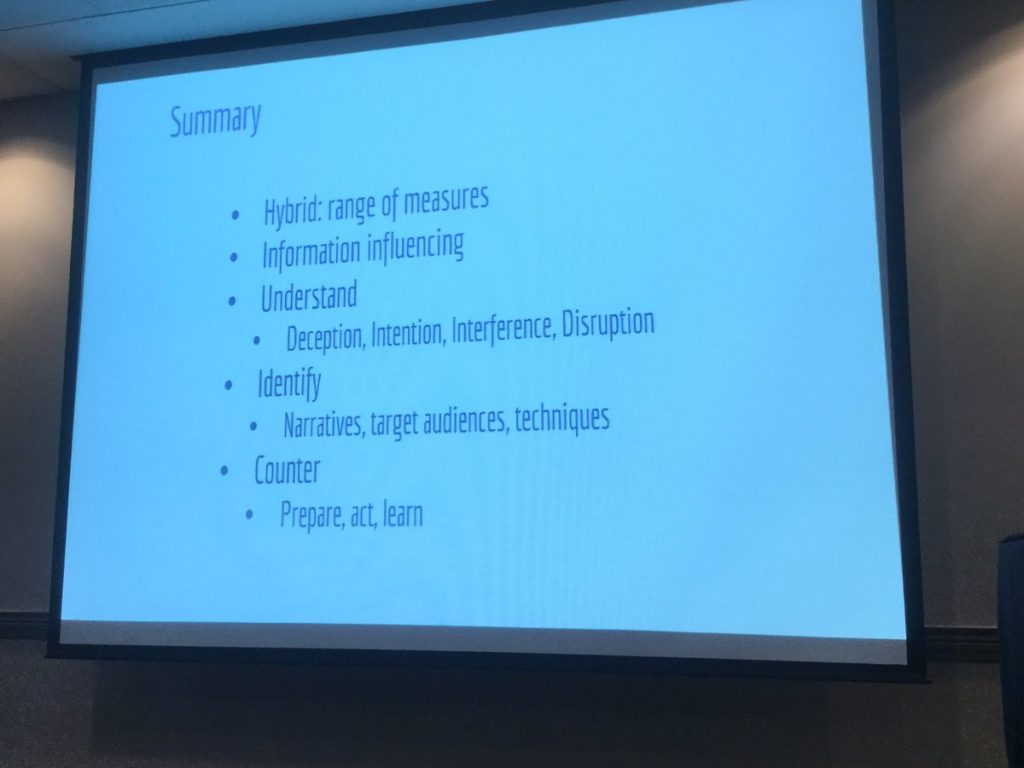 Up next was Ms Lucy Ellis, from the Canadian Department of National Defence with her insightful session on Strategic Storytelling. This presentation highlighted the importance of doing your story-telling right during ‘home games’ such a humanitarian and disaster relief missions, so that it is well-versed and practised for the ‘away games’ such as the Canadian mission in Mali. Lucy’s key takeaway was the use of “we” to give the social media accounts more empathy and authenticity. Oh, and she captured the conference with her humble use of the ‘Humble Brag’! 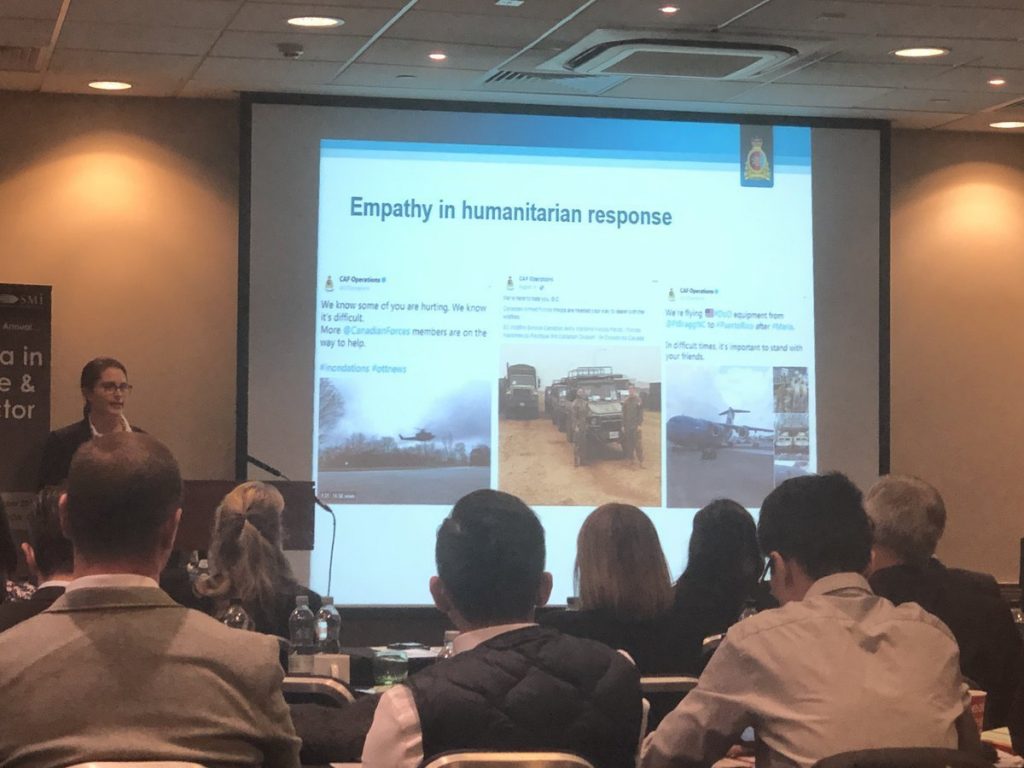 This was followed by a panel discussion and afternoon tea, the conference was joined by Dr Abdullahi Tasiu Abubakar from the City University London, who spoke about how Boko Haram has integrated social media into its communication strategy and the efforts by the Nigerian government to counter, using the Chibok #BringBackOurGirls campaign as a case study. 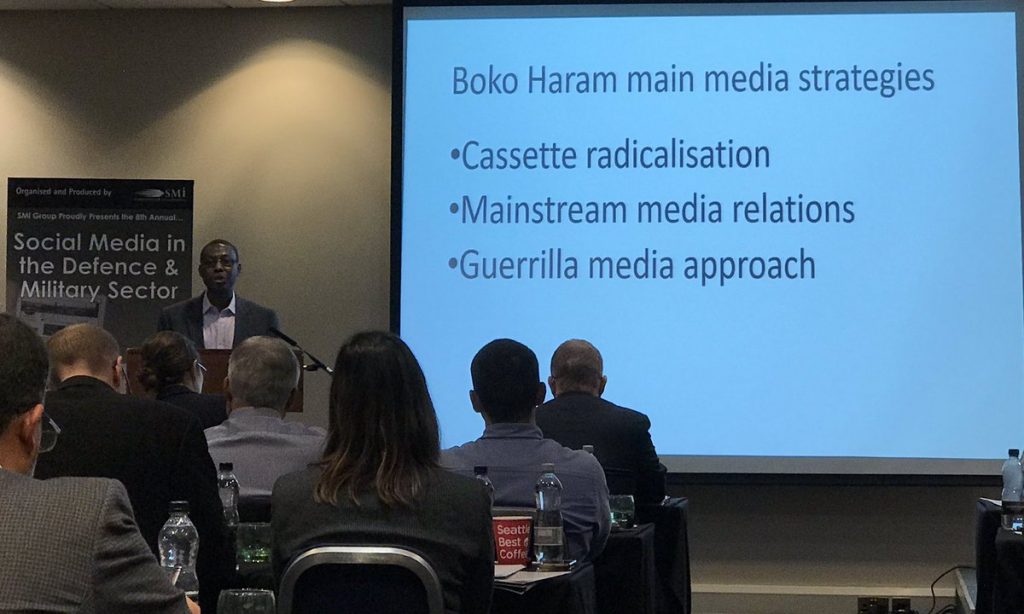 Day one ended with a sobering example of handling crisis comms with Nathan Herring for US AFRICOM, taking the audience step-by-step through the events surrounding the ambush of US Special Forces in Niger. This reminded many that although we tend to focus on good news, recruiting and retention positive stories, the very real fact is that often the situation is stingingly harsh and it is the role of communicators to manage the story as best as possible under difficult circumstances. 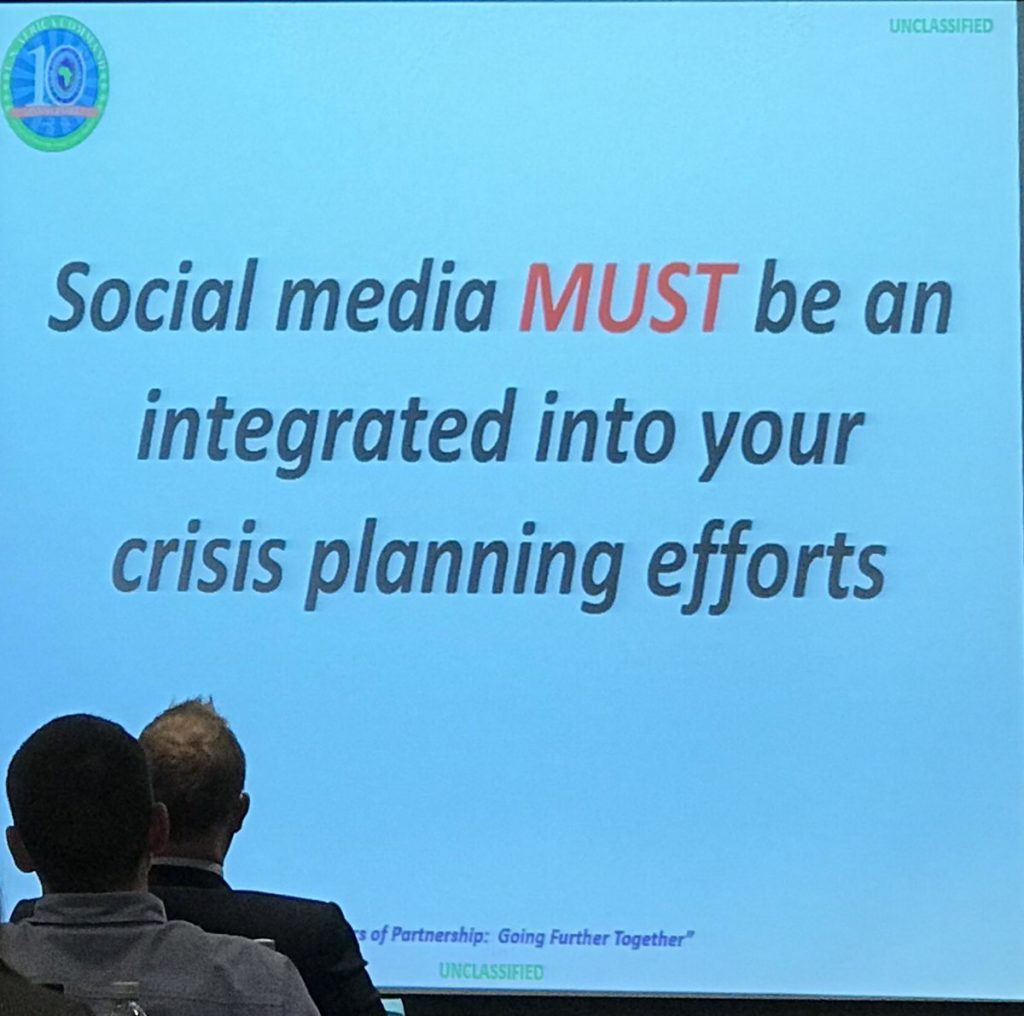 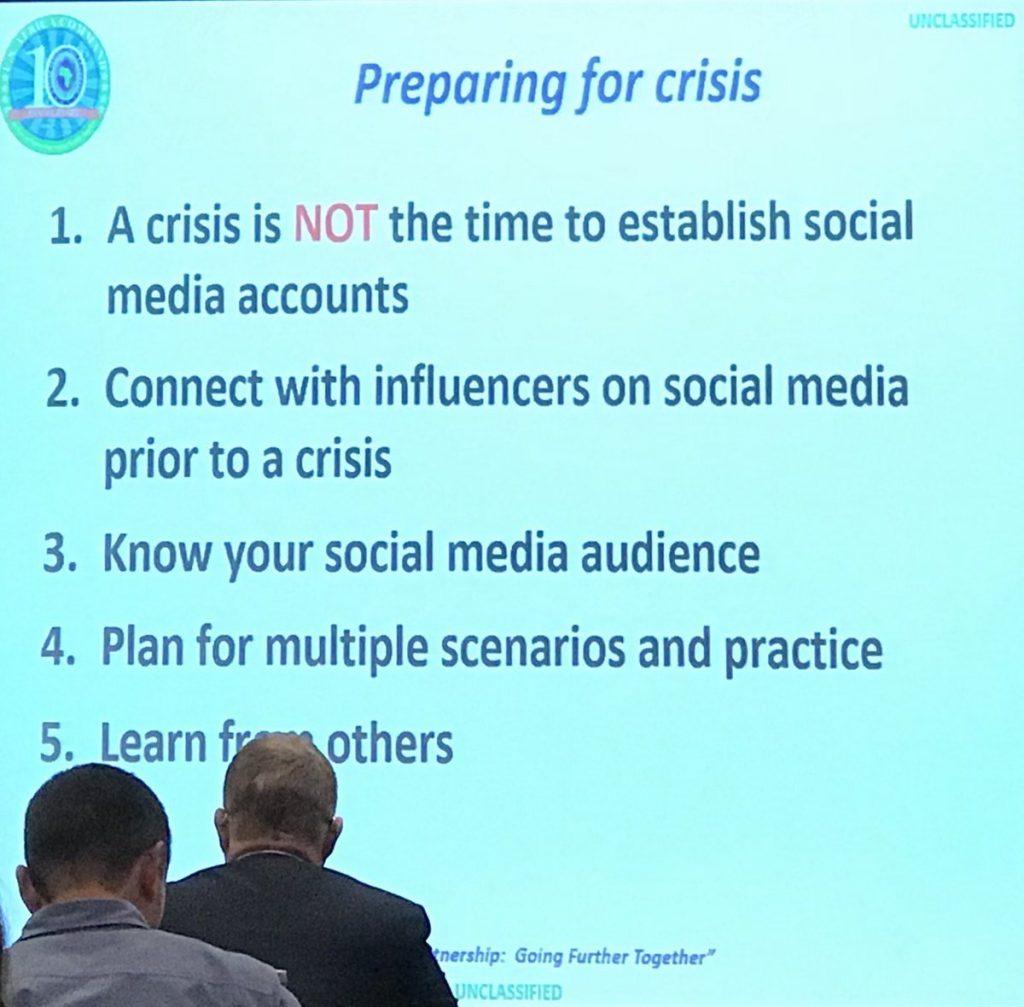 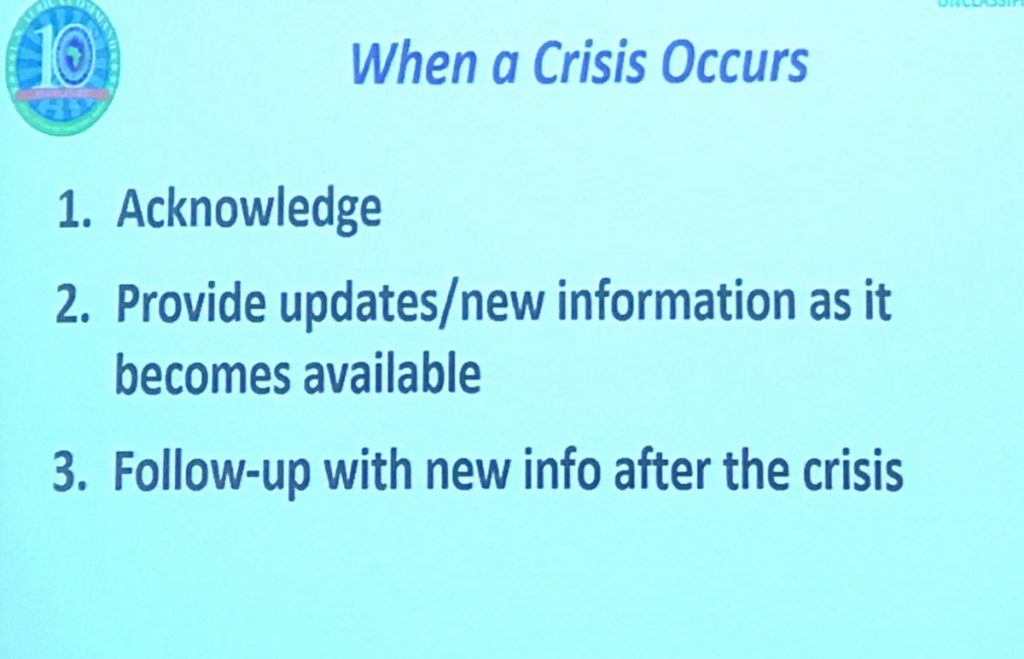 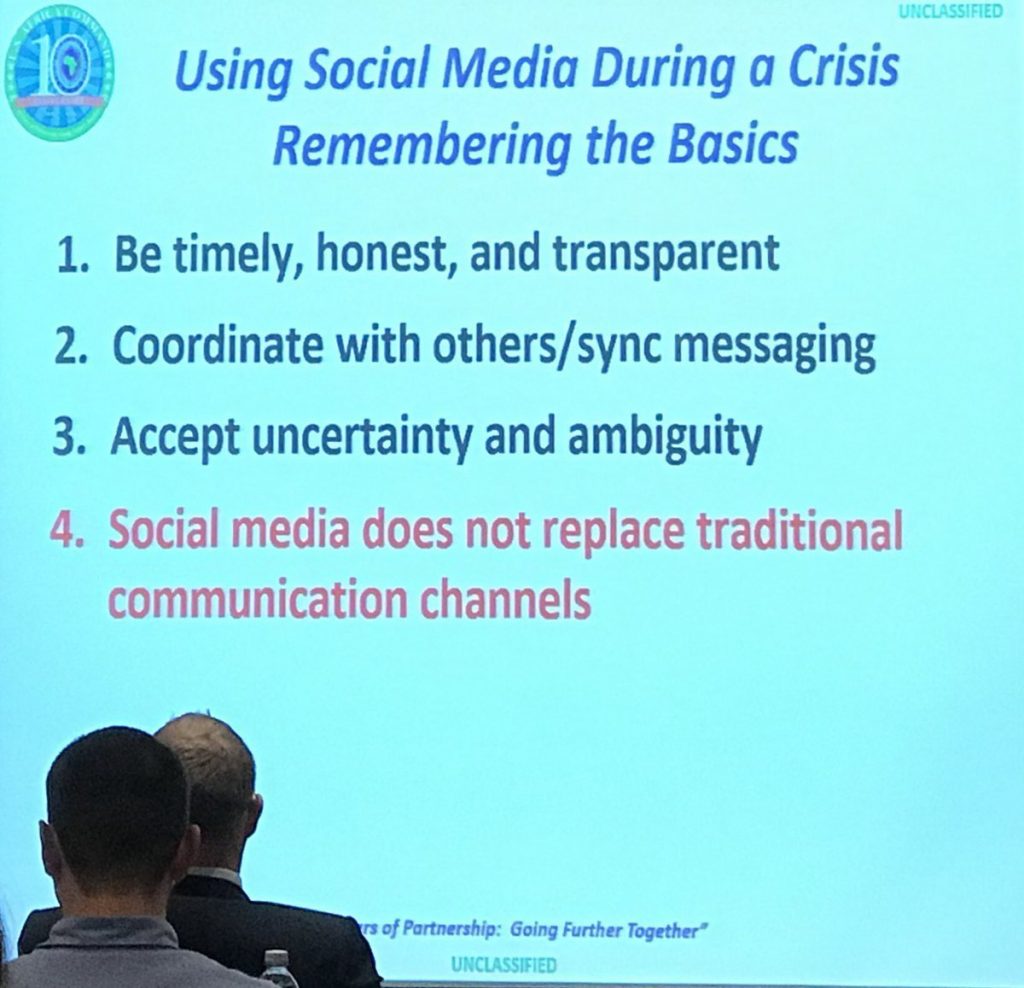 Day two opened with Colonel Joseph Tan, who briefed on the 5 (soon to be 6) pillars of Singapore’s Total Defence programme. Military, Social, Psychological, Economic and Civil Defence will soon be joined by Digital Defence. Started in 1984 the Total Defence strategy capitalises on the small countries’ position and centres on the 3 Cs; Call to Action, Collaboration and Communication.

This case study provides a simple but effective model for cross-government, national strategy which promotes “Alert – Not Alarmed” messages, using a wide range of digital and non-digital channels. 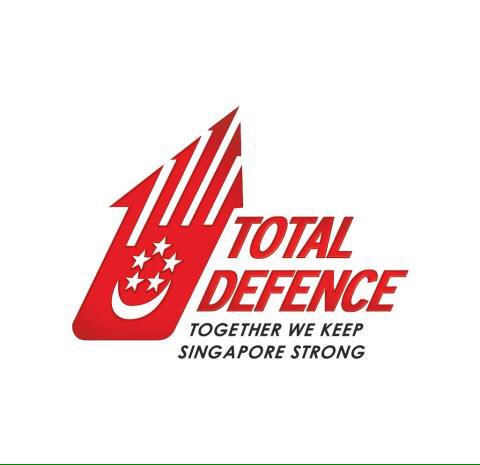 The world tour continued to Norway next, with a review of the social media strategy that supported the recent NATO exercise, Trident Juncture. 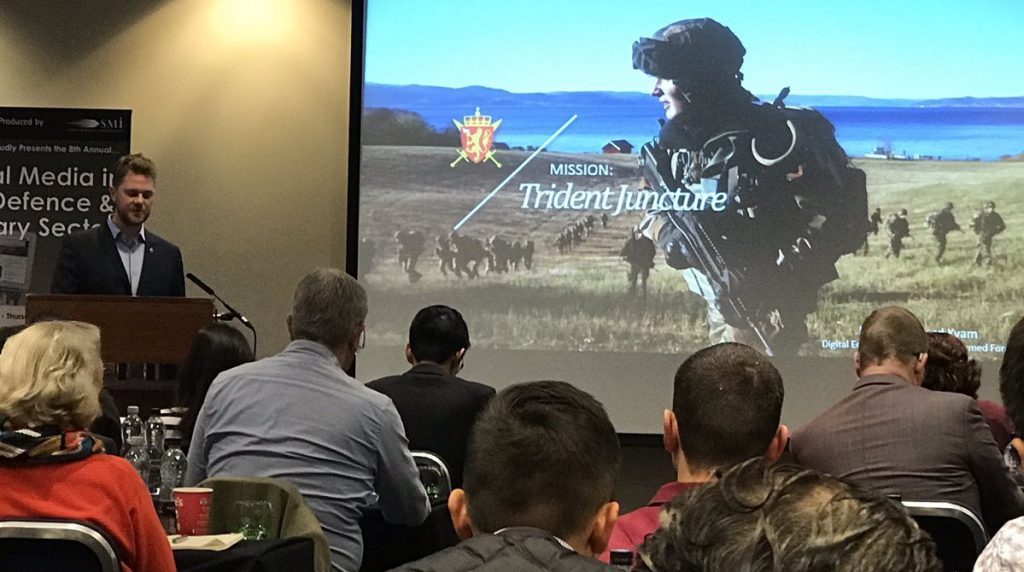 Harald Nygaard Kvam, from the Norwegian Armed Forces Media Centre, showed how a simple plan with a clear content delivery can be hugely effective; reaching 2 Million people, that’s 50% of the country’s adult population, 5 times, even in remote areas. Key to the success of the campaign was the use of FACES from all 51 participating partners, to show the human stories behind the exercise. Harald delivered another important message – ‘Don’t waste time measuring vanity metrics (Likes, Reach etc), they may be interesting MoP (Measures of Performance) but what counts is engagement, measured in this case by watching the videos for more than 10 secs.’ 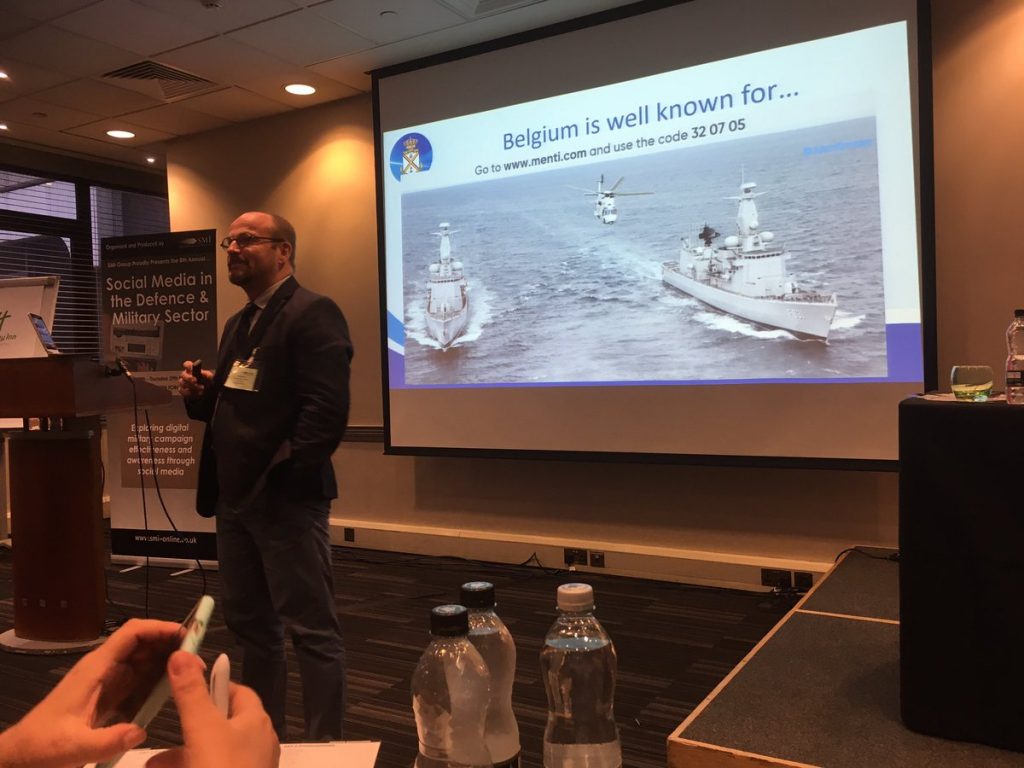 From a tall Viking to a small sailor, Commander Ward De Grieve gave a humorous view of The Belgian Navy under the title of The Law of Small Numbers. Examining how a small team with a very limited budget can deliver a disproportionate level of outreach, external comms, recruitment and internal comms.

From small scale and large next, Miss Tiffany Miller from the Office of the Secretary of Defense at the Pentagon described how high-level leadership engagement is achieved. Tiffany highlighted how different leaders have very different approaches and how by developing understanding and confidence leads to improved levels of trust and freedom of action. 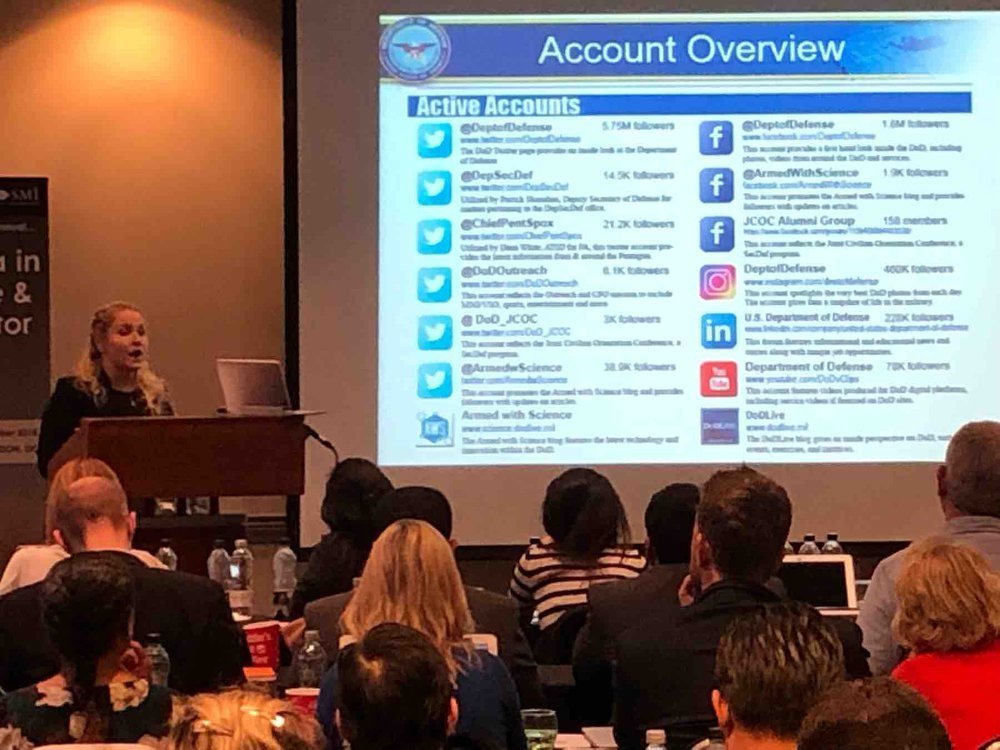 We crossed back over the Atlantic next, with the German use of YouTube, Instagram and SnapChat with Dirk von Holleben (Director of Communications, German Armed Forces). This session examined how ordinary recruits became YouTube stars and how a German celebrity was embedded in the Bundeswehr Special Forces – the KSK. The approach of using established ‘influencers’ as well as creating your own rock stars, resonated with the conference theme of people. Cross-platform content was also highlighted as the theme tune to the Mali series topped the download charts! 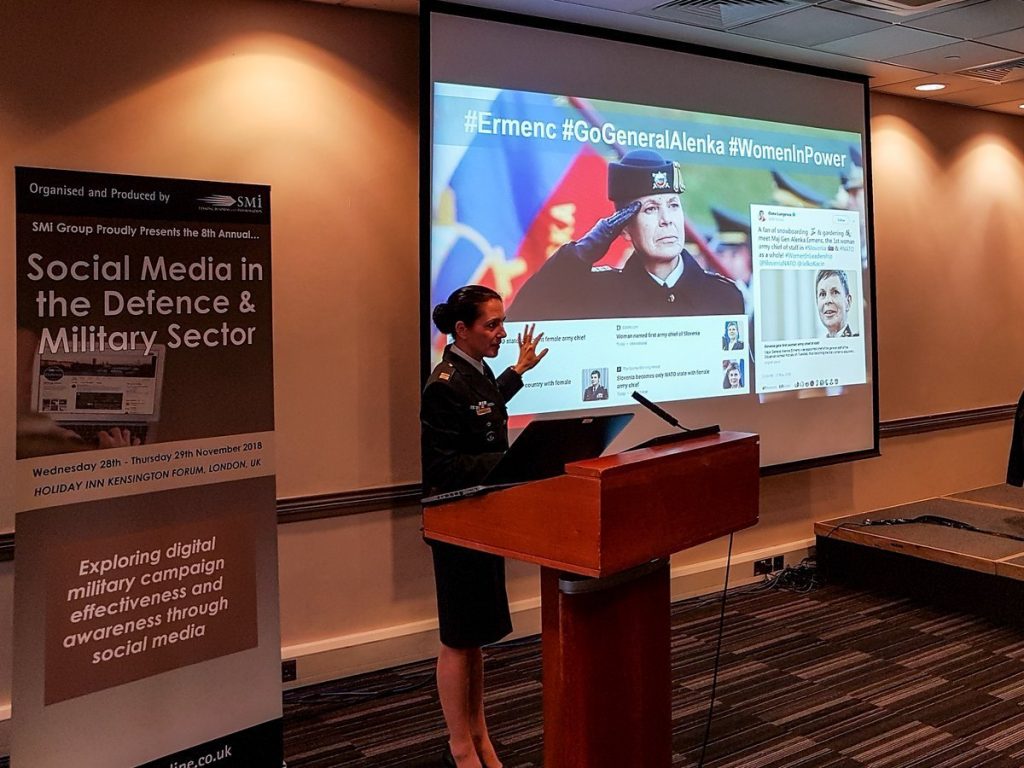 Nina then joined Tiffany and Ward for the panel discussion. The panel were asked for their top challenges; Coordination, information sharing, leadership buy-in, continuity and the danger of message fratricide. The panel also discussed the risk of leaks, especially when working in multinational operations whilst delivering user-generated content and the ‘vetting’ of advocates and influencers who may wish to be associated with our organisations.

The conference finished with Mrs Alicia Kearns advocating her Practical Approach to Defeating Disinformation and Violent Extremism in the Digital Age of Hybrid Warfare. This thought-provoking session called for a more proactive and robust response to hybrid threats across all communications channels, especially social media. 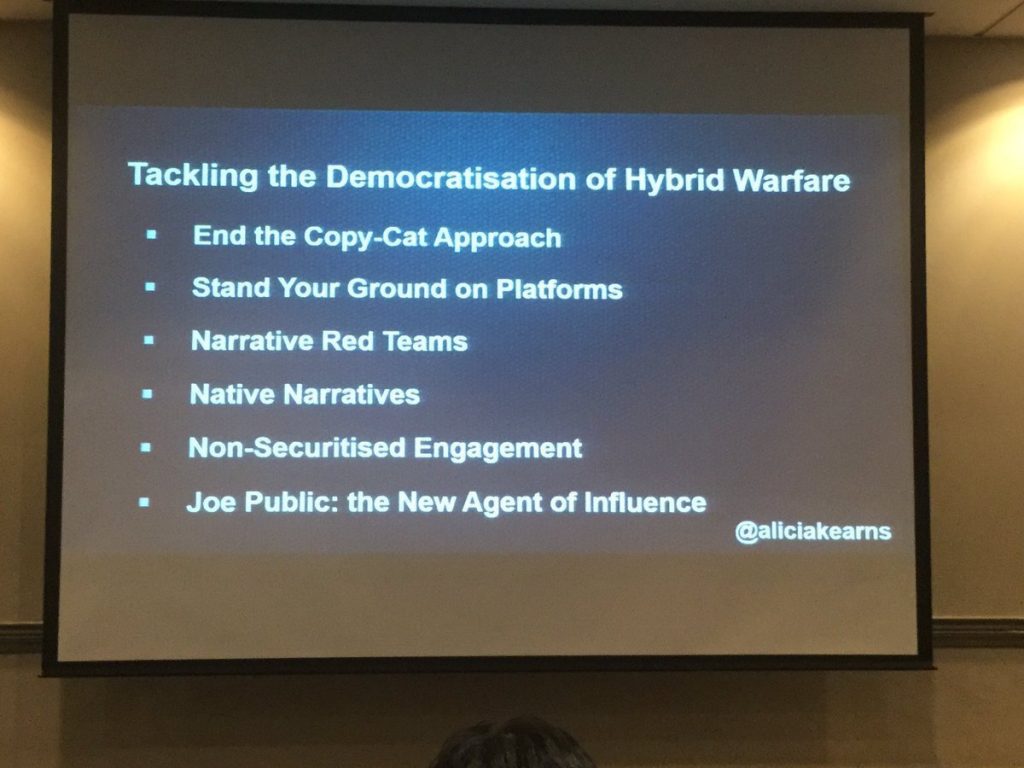 For me as chairman, the key take-aways from the #MilSocialMedia conference were:

People give accounts authenticity and an emotional hook, especially if delivered in plain language and the use of “we” (or wij, wir or Мы). It goes without saying, that we must understand our audiences intimately and where they reside online.

Content is king – but will always be far more effective if amplified, reinforced and engaged with by partners, advocates and others.

Social media practitioners, just like any other specialist, must be given the right tools to do their job and the training required to deliver the commander’s desired effect, on time and on target.

Clearly the #MilSocialMedia community must adopt a Knowledge-Skills-Experience (KSE) approach and campaign hard to increase wider understanding and trust. Commanders must see that these communications and engagement efforts are not simply Public Affairs and PR to support recruiting, but an integral element of Information Warfare and the critical component in holding the new vital ground – the Information Environment.

What were YOUR key lessons from the conference?

What are you thoughts? Cancel reply